Have you been promoted and left hanging? 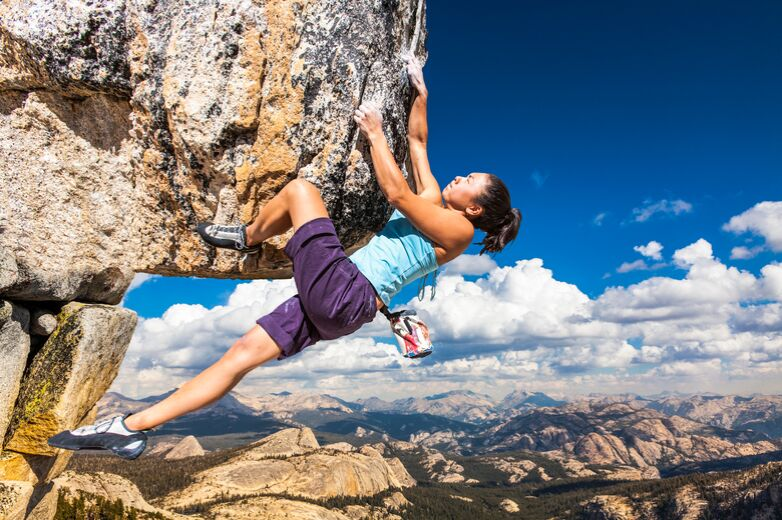 Staff are crying out for emotionally intelligent management.

In simple terms, we can usually divide our careers into two parts.  Before we managed people and after.

The first part of our career is usually spent building and honing our skills.  We may start off as generalists, but gradually as we get recognised and rewarded for what we do well, we focus on our strengths.  Perhaps without realising it, we become an “expert” in a particular area.

After a time, if we do this well enough we usually get given people to manage.

Promotion and progress are linked to managing others

Without knowing it, we’ve arrived at the Promotion Precipice.  It’s a place of great opportunity, but also one of great unknown and potential risk.

Because in the eighteen years I’ve been coaching leaders and their teams, I’ve met only a handful of people who received any form of training BEFORE they were given people to manage.

Yet everything has fundamentally changed 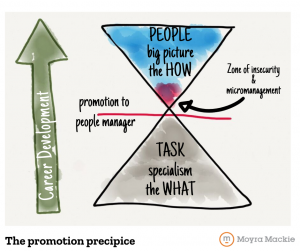 From now on a manager cannot just focus on developing skills related to their task – the WHAT.  Now they have to focus on the HOW, on building the skills of others.

Of course our Before Management career has involved people skills, but it’s different.  Let’s take the example of an orchestra.

Before management you played the trumpet.  You needed to be good at playing the trumpet, but also mindful of how you kept time and tune with the rest of the brass section.  You also had to pay attention to what the rest of the orchestra were doing.

You keep your place by being a good solo contributor and by fitting in with the rest of the team.

Management requires you put the trumpet down and move to conducting the orchestra.

Once you’re a manager you’re responsible for co-ordinating multiple relationships – down, across and up the organisation.  In fact, getting things done requires that you increasingly look up; that you develop a bigger picture view.

Without training or coaching new management can feel precarious

Many organisations claim that they promote people on potential, but from what I’ve witnessed, promotion is usually gained as a result of performance; of delivering something of substance related to the skills you have honed.  There tends to be an assumption that this performance is automatically the beginning of a pattern that can be repeated, but this time with a team in tow.

Just think about that for a second.  If you were suddenly required to operate a new piece of machinery at work that was vital to your safety and success and those of others, you’d get training right?  Yet companies think it’s ok to give a new manager a team without even an instruction manual and some web-based training.

No wonder more than 60% of workers would fire their managers

If you’re lucky, you’ll get a boss who knows how to coach you and will offer vital support as you begin the new climb away from what got you promoted.

However, what we frequently see is that new managers want to cling on to what got them promoted.  They can’t put down the trumpet and conduct the orchestra.

What is happening is that to compensate for that feeling of lack of control and feeling of loss that comes with giving up the “doing”, insecure managers try to assert control in all the wrong places.

They fail to delegate effectively and fall into the trap of micromanaging.  They still believe that focusing on the task – essentially looking down – will get them through.

The hard truth is you need the soft stuff

The inappropriately labelled “soft skills” are what will allow you to manage those feelings of insecurity and start leading your team.  Here’s Douglas Conant, former CEO of Campbell Soup:

“Most people that derail as leaders in the corporate world, it’s not because they couldn’t do the math and calculate return on investment properly. The issues are communication and understanding. All of what typically would’ve been called the ‘soft stuff.’ You have to be authentic. You have to be dialled into the soft stuff. Your EQ [Emotional Quotient] has to keep up with your IQ.”

Conant is right to identify that “soft skills” is really another way of talking about Emotional Intelligence. Every interaction we have involves emotions, whether we are aware of them or not.  Those with EQ are aware of their own emotions and the emotions of those around them.  They are able to manage their own feelings, especially in high-stakes moments, and able to positively influence the emotions of others.

This isn’t easy, but it’s a learnable skill.  We’ve seen remarkable transformations in individuals and groups that we work with.  The pay-offs are obvious:

“If we all spent more time figuring out how to do the so-called soft stuff really well:  We would not have much hard stuff to do… because when you do the soft stuff well, your team will take care of the hard stuff… because they know exactly how to do it, and they will do it if they want to do it… and they will want to do it if you do the SOFT stuff well.” ~ Lee Cockerell, former Executive Vice President of Operations for the Walt Disney World® Resort.

Soft skills could also be described as life, leadership and fulfillment skills

They’re what will keep us away from that precipice, at home and at work.

If you’re a manager who is struggling to motivate and delegate why not listen to my podcast series?  It focuses on how to manage millennials, but is equally relevant for any manager who wants to get off the leadership precipice and develop emotionally intelligent management.

← Leaders aren’t late: If you can’t manage your time you certainly can’t lead What do leaders fear the most? →
Share this...