Beware the victim…and the rescuing hero 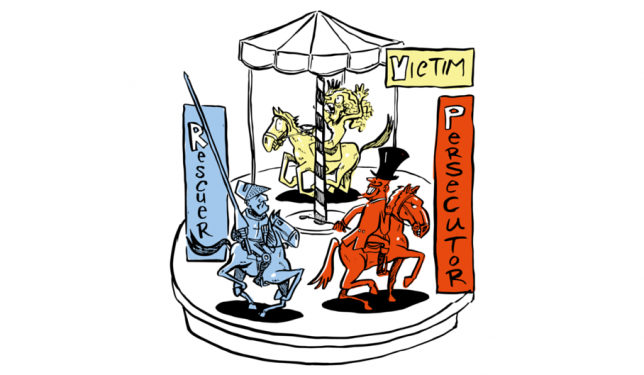 What happens when you experience conflict at home or at work?

If you’re directly involved, do you feel helpless and put upon; pretty certain that there’s nothing you can do?  Or do you feel angry; blaming the other side for everything that has happened?

Perhaps you’re slightly outside the direct conflict – a concerned friend, family member or manager.  Do you jump at the chance to help solve the problem?  This might mean taking sides or taking responsibility for coming up with a solution that seems right to you.

If any of these sound familiar, welcome to the Drama Triangle

Conflict is something that very few of us feel comfortable with.  Our emotions – whether we acknowledge them or not – are heightened. Dr Stephen Karpman,  a psychologist as well as an amateur actor, observed in his research that people in emotionally charged situations often feel they have only three positions open to them.

Karpman called the framework that emerged from his research the Drama Triangle, when it might well also be called the Conflict Triangle.

We choose an approach that feels instinctive but is learnt

Karpman’s research showed that when we feel under pressure we step into the triangle, rather as an actor steps onto the stage.  We play a role. 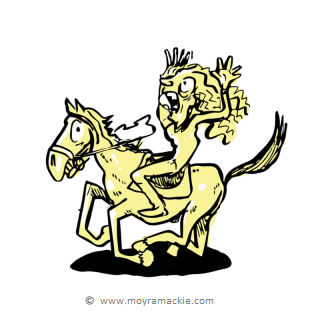 Victims believe they are not in charge of the speed or direction of their own choices.  They feel oppressed, helpless, hopeless, powerless and ashamed.  They seem unable to make decisions, solve problems or achieve insight. They are stuck.

Significantly, if Victims are not being persecuted, they will seek out a Persecutor and a  Rescuer who can save the day. This serves to preserve the Victims’ negative feelings and give them some kind of unconscious reward for staying stuck. 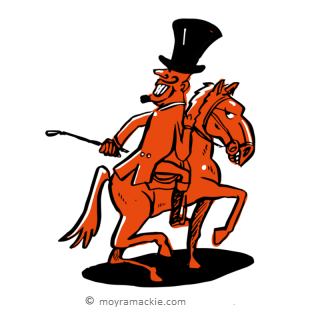 Persecutors insist “It’s all your fault.”  Persecutors are controlling, blaming, critical and angry.  They tend to impose their authority on others and are rigid and uncompromising.  It’s often difficult to work out what Persecutors really want amid the blame and finger pointing. 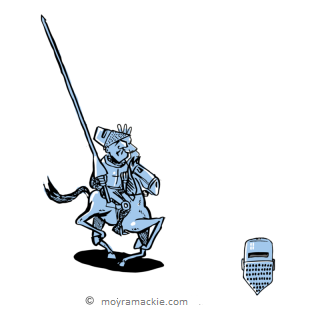 Regardless of gender, I think this role resembles a knight in shining armour; I will ride to the rescue and save you. Indeed, Rescuers feel guilty if they don’t charge in to save the day.

However, rescuing keeps Victims dependent and gives them permission to fail. As long as the focus is on helping the Victim or side-lining the Persecutor, Rescuers can cover up or ignore their own anxieties.

A merry go round of power and responsibility

The Drama Triangle is a framework for understanding the connection between personal responsibility and power in conflict situations.  It highlights the destructive and shifting roles people can play. 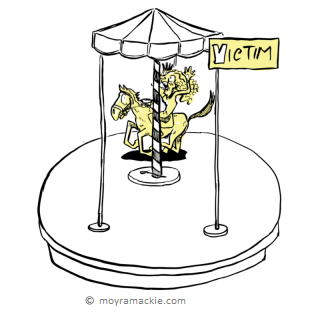 I think of the Drama Triangle as a strange kind of merry-go-round, which starts when one person takes on the role of a victim or persecutor. This person then feels the need to enlist other players into the conflict. We need one person on each seat in this drama.  However, the roles can switch at any moment; the victim might turn on the rescuer, the rescuer then switches to persecuting. Usually, for the drama to play out, each person will occupy all three positions at least once.

Being stuck is sometimes what we want

Whilst this can be a drama involving individuals, parts of organisations can also take up different roles on the merry go round.  Organisations that don’t really want to change, whose espoused values are at odds with the actions of staff and management, are likely to be a rich source of Drama.

One such example might be HR.  In a dysfunctional organisation they might want to be the Rescuer.  They will attempt to provide as much in-house training and development as they can – they want to be the ones to help and to change people.  Yet in a moment they will switch to Persecutor when they devise models for reward and recognition that also involve punishment and blame (Bell Curve and Nine Box Grid anyone?)  They may then become the Victim when talking to senior management – professing that certain things cannot change or, if they can, it’s not down to them.

The reason the situation continues is that each protagonist in the Drama gets their unspoken (and frequently unconscious) psychological needs met in a way where they feel justified, without having to acknowledge the broader dysfunction in the wider system.

Coaches are not immune to Drama

As a coach and organisational consultant, someone outside the system and outside the Drama, it is often quite easy to observe the roles that have been chosen.  However, we coaches are human and have our own dramatic patterns that can tempt us. One of the many benefits of rigorous coaching training and on-going professional supervision is that we continuously reflect on our own part in these dynamics.

Clients can often present as victims of circumstances and I’m sure you can see the danger in a dynamic where both sides say they are interested in change, yet the unconscious patterns result in more “stuck-ness”.

Coaches (and many managers) are natural Rescuers. I know that would be my favourite seat on the Drama merry go round.

On the surface the Rescuers/Hero Leaders want to solve problems. They make great efforts to do so, but frequently there is a hidden motive to not succeed, or to succeed in a way which benefits their ego.

Charismatic or hero-type leaders cover up their own anxieties by placing the focus on those they are rescuing. By doing this, they boost their self-esteem, receive respected rescue status and get pleasure from being depended upon.

Thanks to the work of Acey Choy and David Emerald, we have alternatives models to help us to respond in emotionally heightened situations.

In The Power of TED, David Emerald, recommends that the victim chooses the alternative role of creator, views the persecutor as a challenger, and seeks a coach instead of a rescuer.

In this model, the creator is outcome – rather than problem – oriented.  Challengers force creators to clarify their needs. They focus on resolving the difference between current reality and the envisioned goal by taking incremental steps toward the outcomes they are trying to achieve.

As a coach, I believe that the role that can stop the merry go round is that of the Rescuer.  Hero knights – whether they are parents, teachers, leaders or professional coaches –  need to take off their armour and address their own anxieties before supporting the other players in the drama to do the same.

The vital difference between a rescuer and a coach is that the coach sees the creator as capable of making choices and of solving their own problems. A coach asks questions that enable the creator to see the possibilities for positive action, and to focus on what they do want instead of what they do not want.

Remember these dynamics are at play in our marriages and intimate relationships, in our families and in our classrooms and workplaces.  I’ve ‘fessed up that I could be drawn into rescuing, now what about you?  Where’s your favourite spot on the merry go round?

The images in this post were created by Matthew Buck from Drawnalism who provide in the moment event drawings, illustration and animations to help clients tell their stories.  You can reach Mathew on Twitter or via the Drawnalism website. I can personally vouch for the fact that he is wonderful to collaborate with.

← Gratitude and the benefits of positively paying attention Why I’ve finally embraced the term life coach →
Share this...